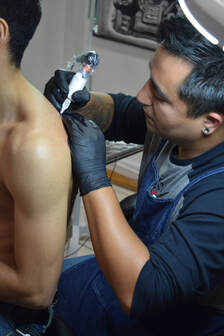 Manny has been obsessed with art since his childhood.  He began drawing at a young age and soon started experimenting with spray cans and graffiti.  He practices many forms of art from pen and ink, to airbrush and painting, sculpting, and tattooing.  He began tattooing in 2006 and has worked with artists from Chicago, Mexico City, and New York.  His work is influenced from Mexican history, childhood experiences, people in his life and the community.  He is open to working with many different styles but enjoys most working with black and grey realism, flowers, skull work, and Mayan influenced pieces.
manny's tattoos
Manny's instagram
sarah's tattoos
sarah's instagram